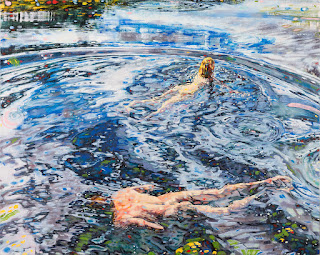 Shepherd is known for his all-over symbolic painting, seen most emphatically from his early career psychedelic phase until circa 2014. Since then, Shepherd has painted singular scenes that are advertently more subtle, but which retain the ongoing core interests of the artist: mythology, dream, nostalgia, the occult and Englishness. Following on from his 2017 exhibition ‘Old England’, where he painted mostly intimate water scenes as a means to obliquely investigate national identity, Shepherd focuses entirely on waterscapes in this exhibition, and to a heightened level. 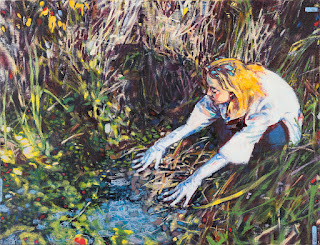 Ranging from intimate paintings at 21x24cm to substantial pieces at 92x115cm, Shepherd presents us with a technically superlative combination of swimming figures; those at water’s edge; and water studies. They are celebratory paintings, where the subjects immerse themselves freely in nature, but are also ritualistic. ‘Circle Round the Sun’ and ‘The Source’ suggest the ceremonial and reverential; and are deeply meditative paintings. In fact, the whole series carries an advisory note: slow down and seek stillness in ever changing waters. 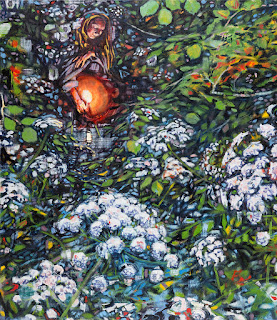 Shepherd also uses water as a signifier of alternate states. Dream, hallucination and role play have always been at the heart of his work, and the distorting effect of bodies in water suggests transformation. Pools or lakes might become liquid portals or gateways, but to where might they lead? A magical realm? The afterlife? Shepherd, as ever, implies but always retains ambiguity in order to allow the audience free interpretation according to the desire of one’s own imagination. 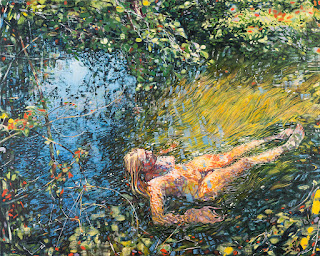 Posted by Zavier Ellis AKA Charlie Smith at 15:50