A three-person show investigating foreboding, personalised mythologies in oil, bronze, plaster and ink. Each of these artists engages with universal mythology in order to derive a unique, subjective and relentless vision. 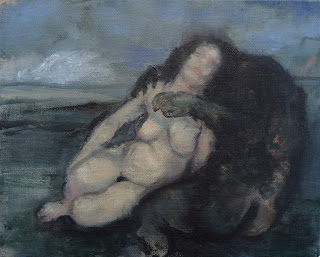 Lisa Ivory’s crepuscular paintings are simultaneously sensual and abject. Often depicting beasts coupling with naked women in open landscape, we are presented with an alternative meditation on man and animal; civilization and nature. Ivory states: “As both myth and symbol, the Wild Man could be both savage and sublime, evoke fear and admiration, and represent our antithesis and ideal. It is a universal condition, as evident within ‘civilization’ as without.” Ivory employs the bestial as an affirmative metaphor. Narratives throughout history have presented the beast as an exiled, malevolent aberration that induces fear and horror, representing the antithesis of society’s expectations. Ivory again: “The monstrous; primitive, irrational Wild Man is at once our fall guy, our belonging and our otherness. The foundling, the waif, the abandoned and the fallen woman share this plight.”
In contrast to prescribed narratives, Ivory’s monsters are Outsiders who are accepted and embraced, no longer the excluded Other. 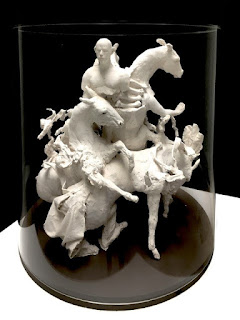 Beth Carter’s plaster and bronze sculptures often combine man and animal, drawing on a rich and ancient history of hybrid mythologies. As the artist states: “Working within the realms of a sculptural tradition where the symbolic use of animal imagery is a potent and continuous source, my work creates allegories by, amongst other things, integrating the human form with animal forms. The resulting imagery holds both a timeless significance and a contemporary relevance despite and because of our separation from the natural world.” The integration of human and animal forms within Carter’s work is effortless, creating an entirely tenable slippage between the imaginary and reality. Referencing, for example, biblical and Celtic mythologies including the Four Horsemen of the Apocalypse or the Underworld, Carter appeals to an internal place that is informed and dominated by storytelling, dream and universal archetypes. 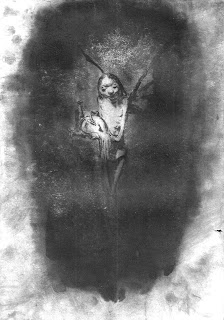 Having been one of the youngest ever pupils to be admitted to the École des Beaux-Arts in Paris at the age of 17 years, Israeli born Josef Ofer has lived in a community of 80 people on the banks of the Amazonian Rio Negro for over two decades. Recalling Francisco Goya, Honoré Daumier and Victor Hugo, Ofer’s ink drawings of often solitary, skeletal figures convey an incomparable inner, existential angst. Occasionally hybrid and bestial, and always redolent with despair, Ofer’s work provides a counterpoint to both Carter and Ivory. More internalised, and inhabiting an isolated wilderness, Ofer’s figures truly depict a Romantic vision, and a critique of society and civilization that can only be achieved by one’s removal from it.

Posted by Zavier Ellis AKA Charlie Smith at 17:22