Words that transform, vibrate and glow: 13 paintings inspired by the lyrics of Nick Cave | Jan-Feb2021 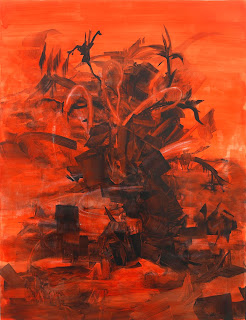 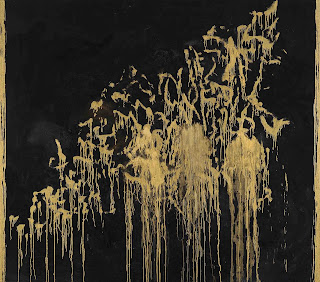 The exhibition was conceived over a year ago and its timing is prescient; Cave’s latest album, Ghosteen, was released with a hallucinatory painting as its cover in October 2019. Unprecedented in their visuality and striking in their ability to conjure apocalyptic landscapes, all the songs on Ghosteen are visions. As Cave embarks on a world tour in 2020, a conversation between his lyrics and painting becomes all the more relevant. 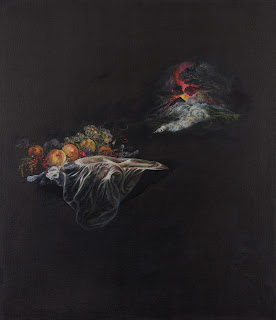 ‘I can’t write a song that I cannot see’, Cave once stated in an interview. Having started his career as a painter, he soon turned to song writing and over several decades has produced a body of lyrics unparalleled in their consistent richness, unforgettable imagery, and unique combinations of darkness, humour, despair and hope.  Drawn from songs written throughout his career, from the famed Peaky Blinders signature tune Red Right Hand to the early and more obscure Release the Bats, the thirteen paintings included in this exhibition are testimony to the fertile but often unexplored territory that lies between the arts. Three of the artists present are musicians: James Johnston was in fact a member of Nick Cave and the Bad Seeds between 2003 and 2008; Emma Bennett is the bassist for Dear Thief; and Daniel P. Carter, who also hosts BBC Radio 1’s Rock Show, performs with metal group Krokodil. 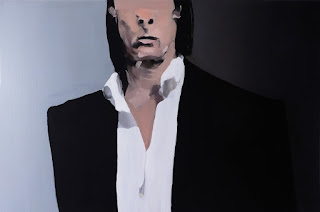 The participating artists represent different generations, backgrounds, and ethnicities and they approach their art in different ways.  Each one has ‘seen’ their painting in Cave’s lyrics in a reverse trajectory to that of the poet. Connecting word to world, the paintings in this exhibition occupy the space in between, opening up new imaginative possibilities. Deeply personal, unexpected and moving, poetry meets image in these thirteen powerful paintings that stretch our sensory and spiritual boundaries. 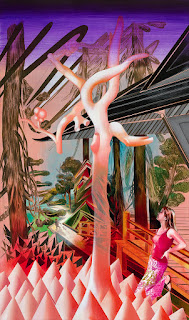 Posted by Zavier Ellis AKA Charlie Smith at 15:05